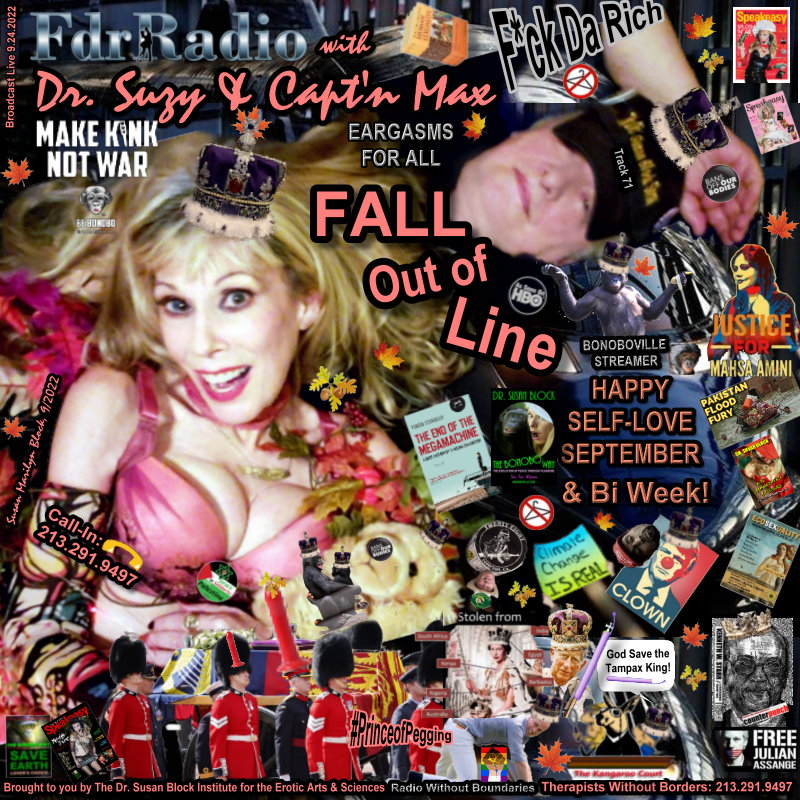 It’s a Rough Ride on the Love Train without Capt’n Max’s baritone in my earphone (he’s there, just not on-air), but “the show must go on,” so on I go, as we “Fall Out of Line” & into a fiery & flooded #Fall Equinox with a Climate-Changed Heat Dome in Heaven & Pakistan & Puerto Rico underwater…

Meanwhile the Capitalocene #MegaMachine keeps pumping that gas & poisoning tap water, now “filtered” from human sewage laced with chemicals like SSRI’s that lower your #SexDrive.. Listen to the Tale of Will, addicted to the antidepressants ruining his libido, & how I help him get it up again! Happy #SelfLoveSeptember! And Happy Bi Week aka Bisexuality Week! Need a sex toy for that?

Welp, a dildo & lube-filled truck lost its load—perhaps a delivery for Big Willie, #PrinceofPegging Heir to #TampaxKing Charles III finally winding up the endless Dead Queen Cosplay, as half the fans of Harry the Spare want to #AbolishtheMonarchy, the other half to reestablish it in Montecito with #PrincessMeghan on the throne. And oh, the British Royal Crime Family’s history of war, colonialism, slavery, theft & genocide is bad enough, but what’s with these giant phallic bearskin capped Dicks on Parade? I love phalluses, but not covered with fur, let alone the fur of Canadian black bears which, though not endangered, should not be murdered for a hat (& I love hats)…

Big Furry CockHats might make you look silly, but an “improperly” worn Hijab can get you killed by Iranian #MoralityPolice as happened to Mahsa Amini; we support the brave protesters against Islamofascism—which is at least as bad as Israel’s Judeofascism & America’s NeoPuritan Christofascism… At least notorious #NeoPuritan Ken Starr is dead, & oh, how much damage was done by this Poster Boy for Right-Wing Hypocrisy, & oh how much fun we had awarding him 1998 “Pornographer of the Year”… And oh how glad we are now to see Ca. Atty Gen Rob Bonta impede LA Sheriff Villaneuva’s Deputy Gangbang of So Cal citizens… In tRump News: Proving QAnon has achieved a Coup Anon in his brain, the Trumpus declares he can declassify top secret documents “just by thinking about it”…. We also talk about Kanye-Never-Reading-A-Book vs. Me reading Fabian Scheidler’s End of the Megamachine: A Brief History of a Failing Civilization, the MM consisting of 4 Tyrannies: 1) military 2) economy 3) religion & 4) #LinearThinking, #4 being my personal weakness, as evidenced by this show… FREE ASSANGE! Get well, Max! Be Bonobo. #ListenUp!

Need to talk PRIVATELY? Experience #PhoneSexTherapy. Call the Therapists Without Borders of the Dr. Susan Block Institute anytime: 213.291.9497. We’re here for YOU.