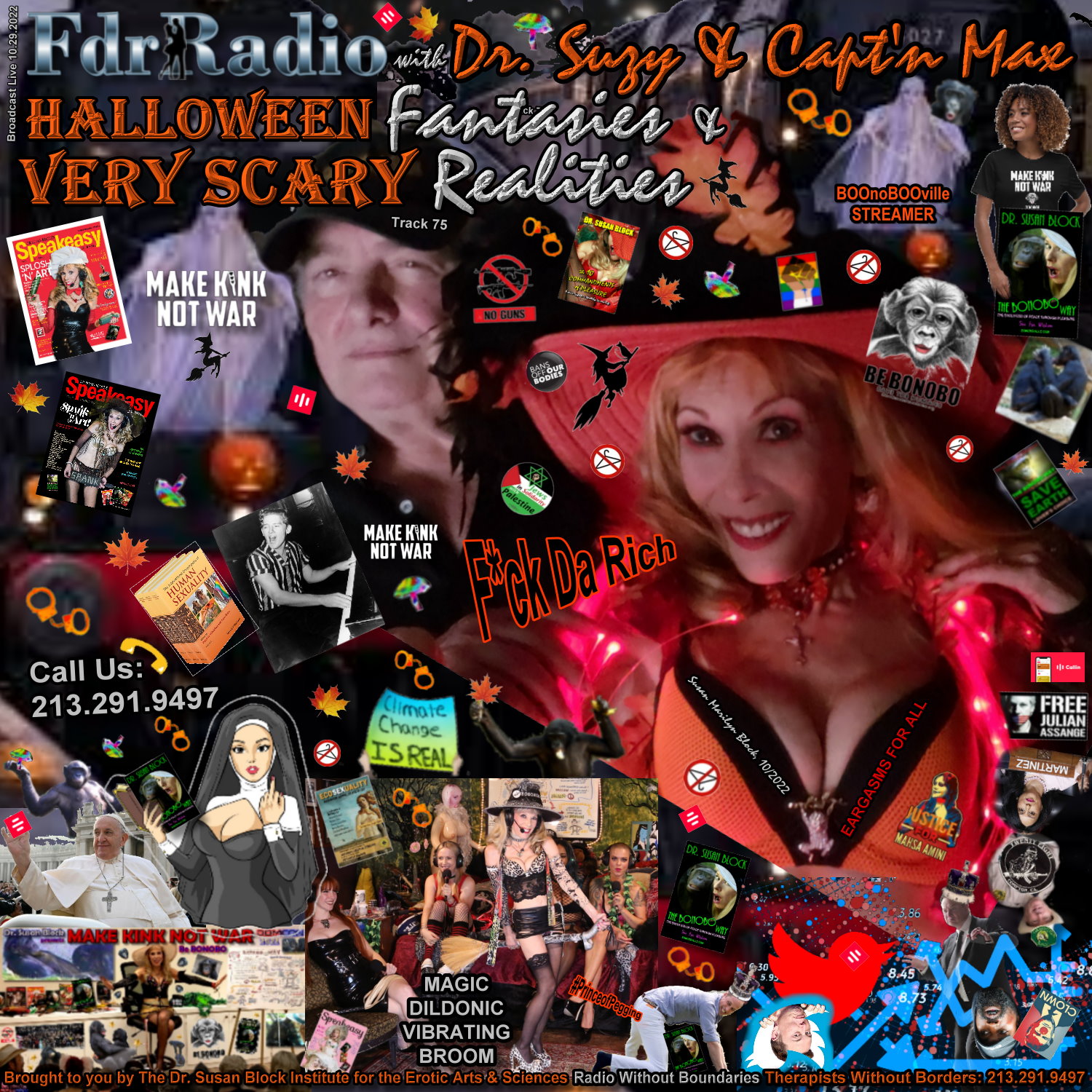 All aboard FDR’s Second Coming on Callin – Vergin’-No-More! Though we’re vergin’ on #Halloween, opening with My Samhain Ode to Sexy Witches, B*tches, Belladonnas & Scary Sex (consenting adults only please!), a Halloween Fever Dream that takes you Over the Moon on My Magic Dildonic Vibrating Broom (great for roleplay, pegging, spanking & good vibrations)… But frightful goblins lurk all around us: Melting Himalayas releasing ancient viruses; upcoming elections portending fascism & violence; people shooting, trampling & beating each other with hammers; the planet heating up, but it could all instantly cool down to nuclear winter, as we’re vergin’ on Armageddon, H-bombs poised for mutual annihilation on both sides of the madness. Now more than ever, we need to Make Kink Not War. Can we “be bonobo” before it’s too late?

Not yet fried alive, we wave farewell to Jerry Lee Lewis (Max was a Jerry Lee tribute artist) whose “Great Balls of Fire” is soaring up to rock & roll heaven or dropping down to honkytonk hell. Another scary reality is Elon Musk’s Twitter takeover. Twitter is not a truck. If someone doesn’t take the wheel, Elon is going to drive his new Twitter truck into a tree. Meanwhile, Musk’s buddy Kanye learned how “going Death/Def Con 3 on Jewish people” translates to losing more than half a billion dollars in a day. #GoBonobos for the Semitic convergence of Old Hollywood & new track shoes. Free Palestine! AND for a comic erotic trick-or-treat, the Pope confesses HIS Halloween fantasies of “#nuns (watching) porn”… Another scary reality: black-robed ghouls on the Supreme Court’s Catholic supermajority stoning American women’s rights to death. Let’s impeach 6 out of 9, starting with Supreme Injustice Clarence Thomas whose wife, Ginni Thomas, is one of leaders of the (still ongoing) Coup Anon Insurrection – & let’s take heart in Iran’s ongoing “Women, Life, Freedom” rebellion against the Ayatollahs, the Persian version of our Supreme Injustices. Meanwhile, racism & greed from our caught-on-tape LA City Council intersect with Sheriff Villaneuva’s murderous deputy gangs. Our Kangaroo Court Arcadia City Council may be smaller, but it’s no better.

We also take a couple of Callin calls from Joe who really resonates with our sex-positive, no-Bernays, no bull message, & Wally who jokes about the great & powerful, one-eyed Halloween Monster threatening to bust through his zipper. Trick or treat!