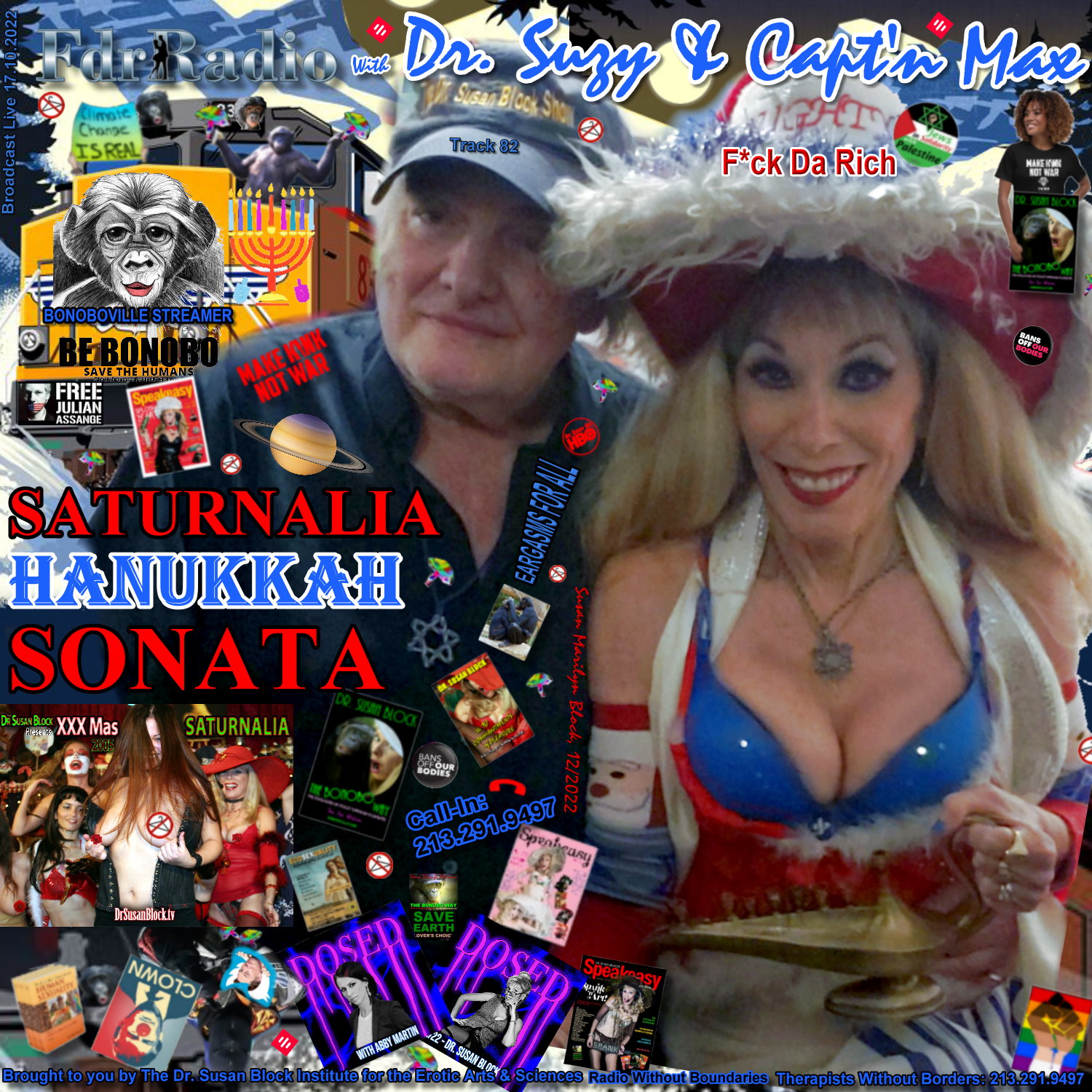 From sexy highs to stormy lows, we ride the turbulence of the holiday season. Still high from my incredible “Dosed” interview with the marvelous Abby Martin & Mike Prysner, I hop on FDR with Capt’n Max, & we roar through Saturnalia with a new release of our orgiastic broadcast from exactly 17 years ago, “XXXmas Saturnalia 2005,” tracing Xmas’ bacchanalian history, wishing, as always, for Peace on Earth & Pleasure for All.

But the evil Krampus—& Antiochus—are never far… and there’s always that nagging Hanukkah worry: Who wants to kill all the Jews NOW? In Hanukkah 2022, that’s easy: Ye (Oy Ye!), aka Kanye or “Con Ye” trying to con us into thinking he’s a misunderstood genius, or poor lonesome bipolar cuckold Incel for Christ… when he’s just an garden variety anti-Semite. Con Ye buddy Nick Fuentes is so incel, he’s volcel, & proclaims that having heterosexual sex is gay. FYI: Judaism & Zionism are not at all the same, & it really hurts Jews for Palestine like me when idiots like Con Ye & Volcel Fuentes conflate the two.

We also say farewell to amazing Twin Peaks composer Angelo Badalamenti & honor International Day to End Violence Against Sex Workers. But the most exciting & unsettling part of the show is what makes it a “sonata,” expressing the rage under the surface of holiday cheer with “conflict instead of continuity, ultimately deriving its impact from the explosive power of tonal organization (definition of “sonata”). The center of the storm is Heidi, a conspiracy theory lover who says she’s not into conspiracy theories, but instantly starts spouting one about the Clintons in Arkansas. Max gets mad, Heidi gets banned, I get unsettled, & if you get vicarious thrills from the unfiltered sounds of fresh marital discord live-on-the-air, this show’s for you! It’s also great radio for other reasons, & we eventually make-up, the Bonobo Way, with a lot of good sex & bananas. Max also predicts his friend Joe will drop all charges against Julian Assange. All Saturnalian conflicts aside, this is our Solstice wish. And speaking of drama, a couple LA Sheriff’s deputies were caught having sex on the radio. Assuming it was consensual, I’d rather they have sex than shoot us, wouldn’t you?