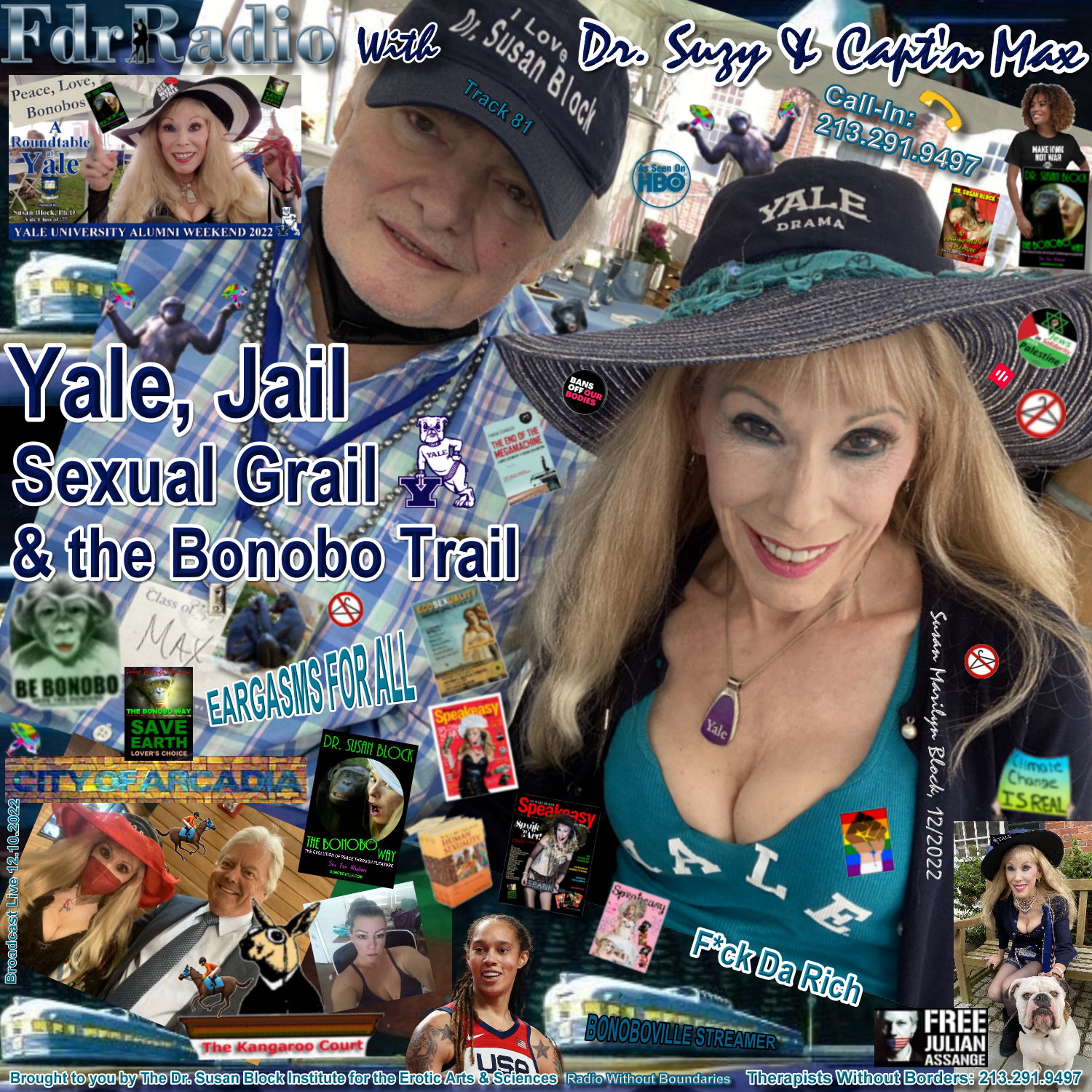 Hop aboard FDR as we celebrate the release of my roundtable at Yale and Brittney Griner’s release from Russian jail, and we continue our search for the “Sexual Grail,” riding the rails of the Bonobo Trail. Midway through, Capt’n Max and I pick up the charming “Heidi” as we make these stops (and more) along the trail:
• At the Arcadia City Council holiday party, I got a hug from outgoing Mayor Tom Beck, patron saint of Santa Anita horseracing and King of the Kangaroo Court that’s been harassing Bonoboville!
• LA City Council’s party was even worse with Santa-capped Councilmember Kevin de Leon physically assaulting Jason Reedy!
• Santa Anita Racetrack’s 2024 “Breeder’s Cup” gives me dystopian nightmares of pregnant handmaids racing to see who can give birth to the most unwanted children first… which unfortunately arouses some commenters, like the descriptively named “Gerbil Hung,” though his silly fantasies are nowhere near as bad as the all-too-real Supreme Court-ordered spaying of women’s rights.
• Why anxiety should be channeled through consenting adult kink—not legislation. Eroticize, don’t politicize, your fetishes!
• Why I love-hate those #Yale elites.
• Trying to pick a 2022 SUZY award winner for “Worst Yale Grad”—but there are so many! Bush? Alito? Kavanaugh? DeSantis?
• From Forced Breeding to Forced Feeding!
• From Britney Spears in 2021 to Brittney Griner in 2022, we’re freeing Brittneys everywhere!
• It’s my half-birthday, and a good present (Joe, ya listening?) would be to free Julian Assange, Leonard Peltier and so many more… but tRump-for-Jail—please!
• From the Prison Industrial Complex to YouTube Jail to banishment to mental jails, and now if you have consenting-adult premarital sex in Indonesia, you could go to jail.
• And let’s not forget Mr. Yale-to-Jail: Oathkeepers founder Stewart Rhodes!
• Our continuing search for the “Sexual Grail” of orgasm takes us to the clitoris, Mother of (Almost) All Female Orgasms
• Republican Independent Counsels couldn’t nail Bill Clinton for any of his so-called crimes in Arkansas, so they nailed him for getting nailed.
• One more half-birthday wish: Peace on Earth. Pleasure for All. As the Megamachine forces us down the road of endless conflict and consumption, let’s switch lanes to the Love Train on the #Bonobo Trail, the path of sharing simple consensual pleasures, wherever we can.