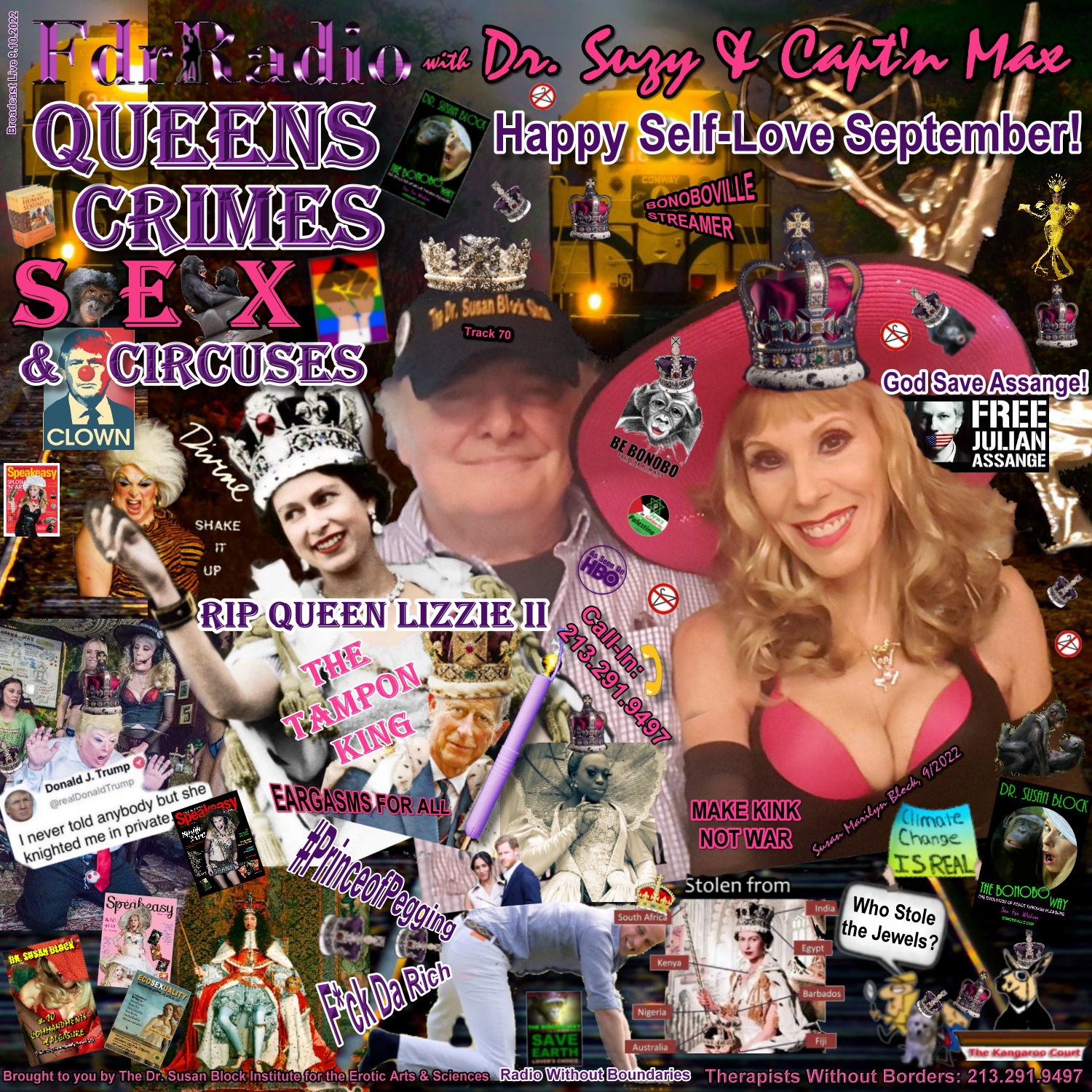 The Queen is Dead. Goddess Save the Queens! And a Happy Self-Love September to all who mourn, celebrate or simply don’t give a fig. As the Love Train rolls out of the second Elizabethan Era into the Great Neo-Feudal Unknown, we receive the news that Queen Lizzie’s dead… but are we ready for His Majesty, the Tampon King, inserting himself into the center of this extravagant cosplay circus of power, opulence and international thievery with a history of colonialism and genocide, known to all as the British Royal Family? Will Charles III be more like Charles II (“the Merry Monarch”) or Charles I (executed by the Roundheads of Parliament)? What about Harry and Meghan and the Prince of Pegging? What about the poor, the people whose human rights “The Firm” has trampled, their ancestors killed, enslaved, colonized, burglarized and brutalized for The Crown? These are our fellow humans whose “job” it is to embody the idea that some people are born into privilege and should live in luxury and rule by birthright whilst the rest—that means you and me—should kneel, obey, pay-pay-pay and enjoy the gossip rags. The Brits worship their Crown Royals like the ancient Greeks did their Gods and Goddesses, but why do Americans care about the Queen? Why do we care about the Kardashians? What is it about “influencers”? Hollywood? Personality politics? What is at the root of these often toxic cults of celebrity? And what about tRump? Sir Donald, Baron of Bullshittery and the never-ending Trump Crime Family Circus give the Royal Crime Family a run for their stolen money in pulling off the “Greatest Grift on Earth,” juggling Top Secret documents, leaping through fiery lies, and inciting armies of clowns, many of them heavily armed and dangerous. No Big Top is big enough for so many clowns, so they are running and shooting through the streets. And did we mention the HEAT? Climate Catastrophes are here… Mid-show, Bob calls in from Oregon to get out of the HEAT, ask a few questions about self-pleasure, share his amazing ejaculatory prowess and celebrate Self-Love September with a Live On-the-Air Self-Loving orgasm! Capt’n Max, aka Prince Maximillian Rudolf Leblovic di Lobkowicz di Filangieri (deposed on both sides) also honor Queens of all kinds, Queen Bees, Queenly Bonobo Matriarchs and Drag Queens. Unlike the Proud Boys (who are obsessed with them), we curtsy to really fine Drag Queens.