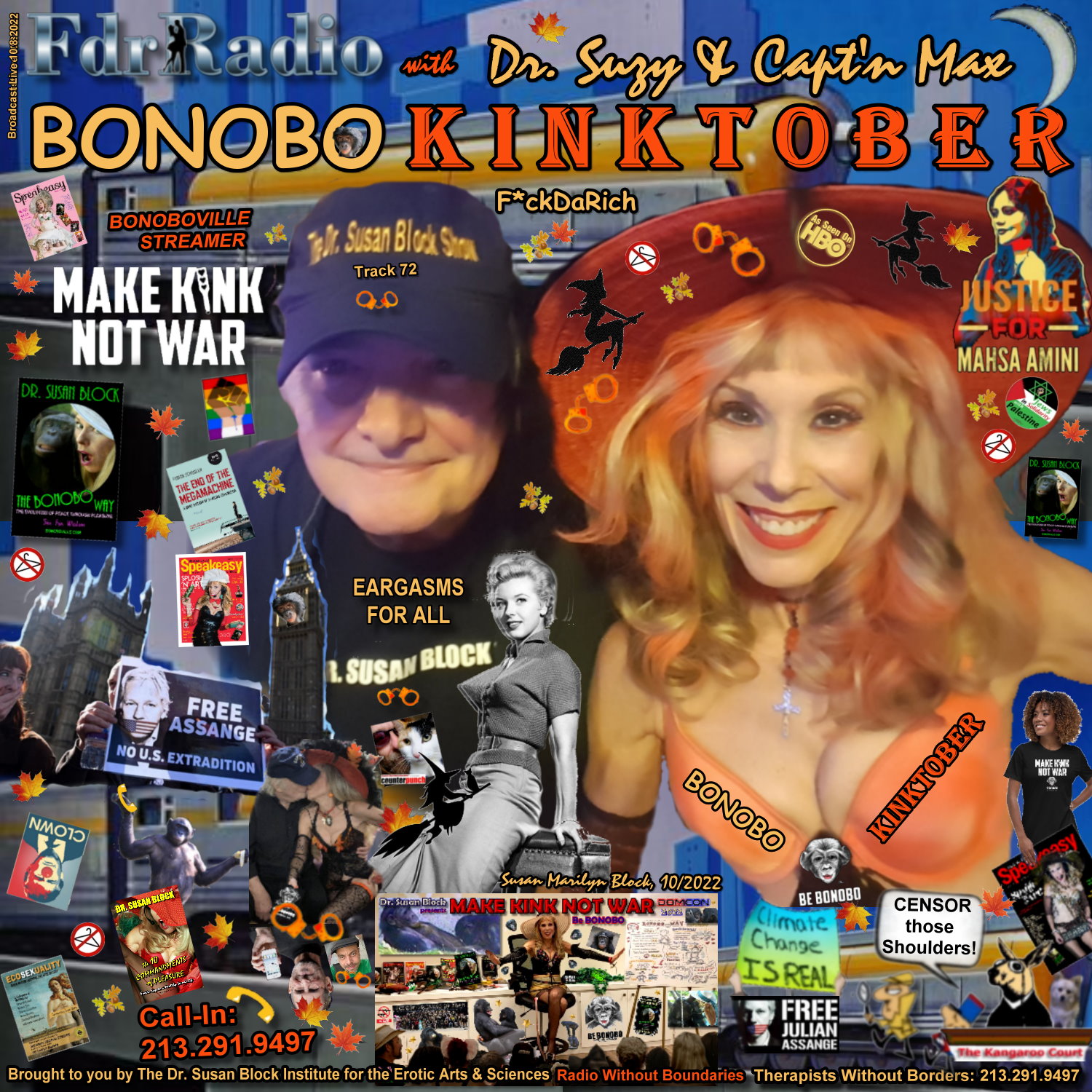 Season’s Beatings and a Happy Bonobo #Kinktober to you and your familiars.

All Aboard FDR for a trippy trip through the Tunnel of Love—which was pretty spooky a couple of weeks ago, when Capt’n Max fell off the tracks, derailed by a monster infection that we’ve been battling ever since. Fortunately, Max comes roaring back this show, ranting against censorship and Republican religiofascism, and declaring his nostalgic love for “Bullet Bras.” I say better to wear a bullet bra than bullets in your bra and an AR-15 over your shoulder. Speaking of shoulders, IG is censoring shoulders now, and GoogleAds is censoring the word “cuckold.” Meanwhile, in Iran, the outrageous “Morality Police” are fueling the hijab rebellion: Women, Life, Freedom! Amen and AWOMEN.

We’re also celebrating Kinktober with the RELEASE of Make Kink Not War: Be Bonobo, Version 6.0 of The Bonobo Way at Domcon LA. Shout-out to my Counterpunch colleague Kollibri terre Sonnenbaum for his engaging Twitter thread converting a “War-Is-Human-Nature” (it’s not) tweeter to the Bonobo Way! And to Steve Jobs’ lame and probably fake last words! And to our media ménage à trois: three different “Hollywood” documentaries with and about HBO and Vice coming soon…

As we broadcast live, protests for Wikileaks’s journalist Julian Assange rise up around the world, including thousands of people surrounding British Parliament in a “Human Chain” of support to #FreeAssange, whom we have supported since 2010. So… Let’s Go Brandon! Stop torturing an innocent journalist! #FreeSpeech advocates on the Right and Left Free Speech all fervently support Assange, yet Democrat and Republican LEADERS all fail to defend him. They are equally awful about the war, which rages on with poopin’ Putin turning 70 in his bunker, as Russian draft dodgers flee, and Ukrainians blow up bridges with American war toys to the ammosexual delight of Youtube viewers at home. No sex toys allowed on YouTube – Just war toys and war games that kill real people. And you wonder why our society is so sick?

As the Love Train leaves the station, Max enjoys a nice chocolate (a traditional aphrodisiac) that happens to be cannabis-infused (a double aphrodisiac), so by the time we arrive, we are off the rails, inspiring a night of orgasmic senior sex like we haven’t had in… a couple of weeks! Wheeee! #GoBonobos for Make-Up Sex!

Need to talk about YOUR kink(s) PRIVATELY? Experience #PhoneSexTherapy. Call the Therapists Without Borders of the Dr. Susan Block Institute anytime: 213.291.9497. We’re here for YOU.