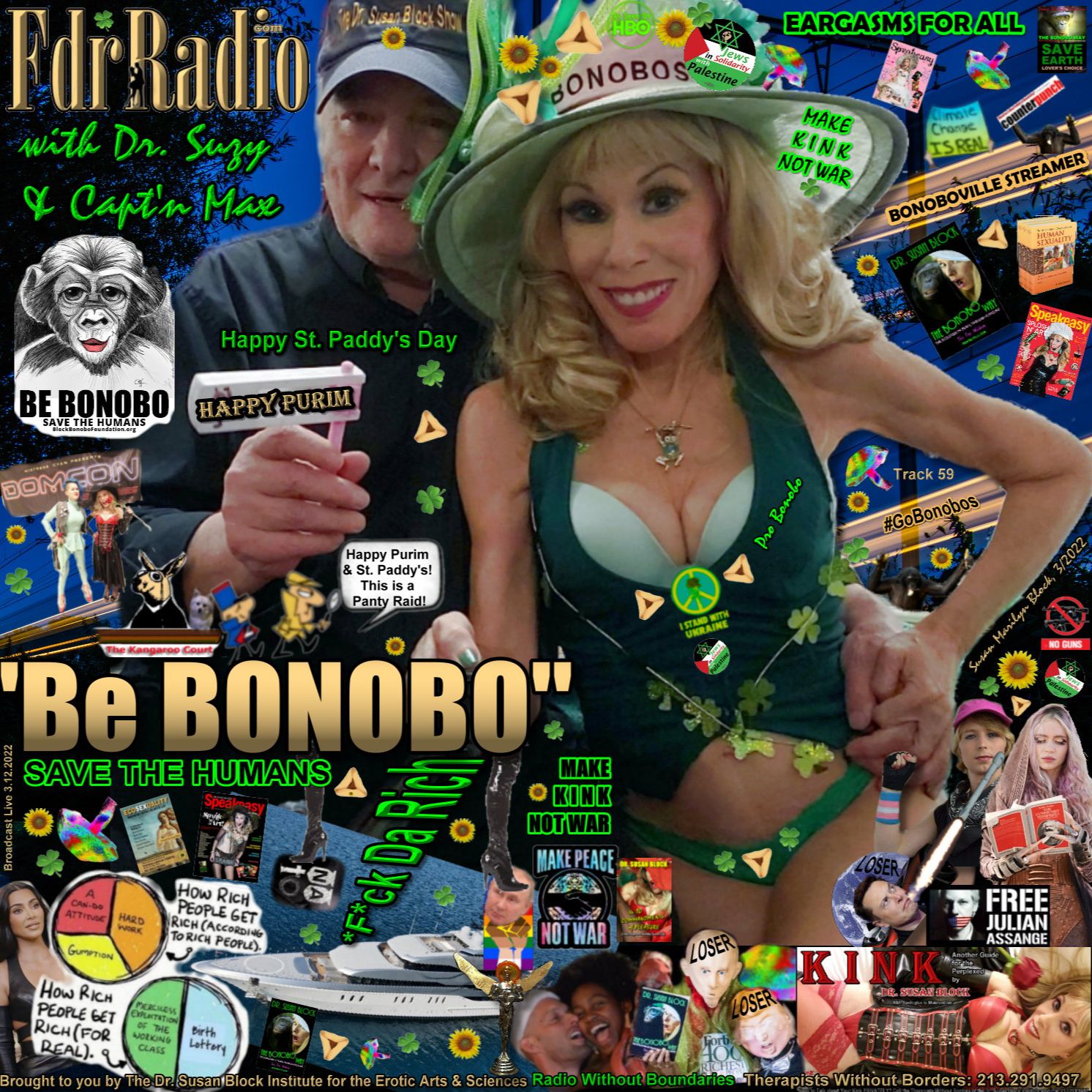 Rumbling through the fog of war, violence, pestilence and greed, we fear no evil, guided by the light of peace, love and good sex along the bumpy but beautiful Bonobo Way. Be Bonobo. Save the Humans. It’s about sharing power and peace through pleasure, like the bonobos, something we humans have found elusive, much to the detriment of most of life on earth. The news is appalling, the sky is falling, so, in a way, there is nothing to say. But we do have a lot to talk about, for instance…
• With our 30th wedding anniversary coming up, Capt’n Max and I reminisce about falling in lust over our mutual opposition to a very popular war (Gulf War 1)—and here we are in another one. To be fair (to the millions murdered), there have been a lot of wars in between, all for the greed of the Military-Industrial Complex and its cheerleader, the Media. Though we didn’t actually stop any wars, our antiwar romance has flourished and grown into our Bonoboville community and more.
• Meanwhile, violence, war, murder in Ukraine, Yemen and at the NY Museum of Modern Art rise like floodwaters of blood, Ammosexual War Porn gushing across our screens as Russian billionaires play “Hide the Yacht”
• We realize that while I read Nancy Drew for the female empowerment, Max saw the plucky young detective as a sex symbol. So bonobo!
• Lots of sex tips this show! Danicka calls in from Texas for a mini lesson in how to slow down an eager lover via erotic teasing, and I give Sarah Ann, whose quick-on-the-trigger boyfriend explodes in her mouth before she’s even warmed up, premature ejaculation “combat” techniques.” I also suggest she give him a “snowball.” Questions, explanations, reactions and snowball fights ensue.
• Sarah Ann, whose quick-on-the-trigger boyfriend explodes in her mouth before she’s even warmed up, gets a lesson in premature ejaculation “combat” techniques,” also prompting me to suggest she give him a “snowball.” Questions, explanations, reactions and sexy snowball fights ensue.
• Cute Karl Marx-reading Grimes—having had a second baby with Elon Musk after their alleged break-up—is dating Wikileaks Whistleblower Chelsea Manning, and hopefully, those two hot girls can siphon some of that Musky Money into freeing Julian Assange.
• Celebrity Idiocracy crossed with Billionaire Hypocrisy Gone Wild: Kim Kardashian’s latest *advice* to budding businesswomen: “Get your f*cking ass up and work. It seems like nobody wants to work these days.” How dare she? Skete-Pete Davidson, please keep Kim K’s mouth filled with snowballs so she can’t speak such vile nonsense.
• More dramatic erotic readings of Daniele Watts (DaLove) poetry inspired by F.D.R. and if anyone can “Be Bonobo,” it’s BeLive and DaLove.
• We support the Ukrainian people, but American Russophobia is getting out of hand. Youtube just took down all of Abby Martin‘s historic “Breaking the Set” episodes on RT (Russian TV). Censorship is ballooning. Soon we won’t be able to find each other…
• As I write this, we’re on the cusp of Purim and St. Paddy’s Day which we usually celebrate with bacchanals which we’re now featuring as throwbacks. So “Sláinte” and “L’chayim” ya’ll! And whatever you do, through the darkness, confusion, war, war talk and relentless war porn, keep your faith in sex and don’t lose touch with your sexuality, your life force, your LOVE force, the essence of your being. #BeBonobo.

Need to Talk PRIVATELY? Call the Therapists Without Borders of the Dr. Susan Block Institute anytime: 213.291.9497. We’re here for YOU