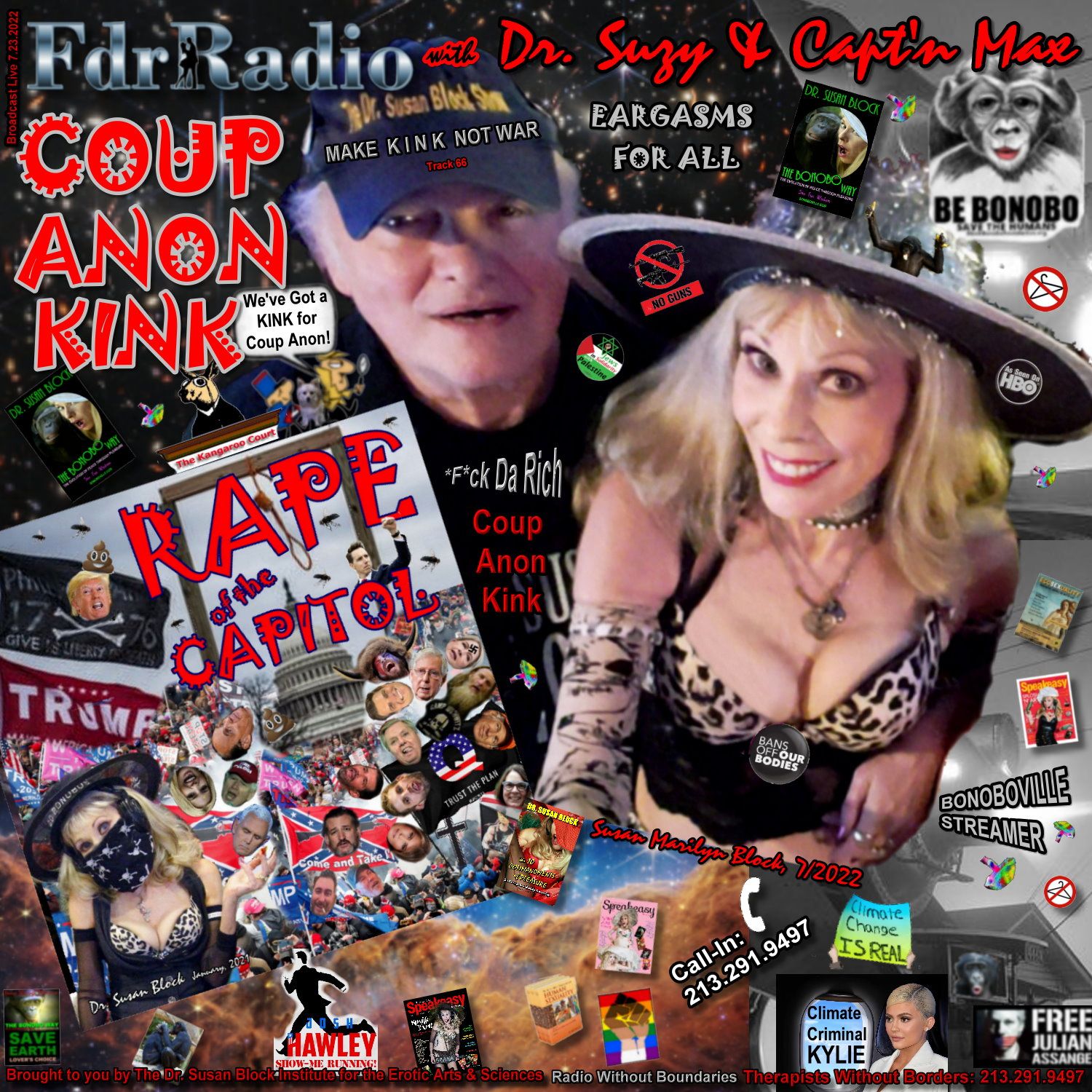 A “Coup Anon” is when QAnon tries to do a coup, and—love it or loathe it—America’s got a Coup Anon Kink. So hop aboard the Love Train as we explore the political, comical, Christofascist and calamitous kinks of the American “Coup Anon” Crusade. It’s depressing—at least for anyone not a billionaire—though I personally am no longer depressed, partly because I got some deep rest. Of course, depression can always return, so I don’t keep guns in the house. As guns get easier to obtain, thanks to our Supreme Injustices, the murders and mass murders mount—and that’s not “mounting” in the fun way. Good thing most of those depressed cosplay-clown Coup Anon’ers weren’t carrying guns on Jan 6, 2021, or the “Rape of the Capitol” would have been a bloodbath. The hearings show us Clown Commander Trumpty-Dumpty, sitting in the White House watching his Coup Anon unfold like a giant wrestling match on Fox TV, hoping they’d soon call him in to declare Martial Law and be crowned President for Life.
Once he realized his “wild” Coup Anon was failing miserably, he reluctantly agreed tell his hordes to go home, but not that he lost the election. He also appears to have poisoned the Secret Service, turning a couple into Coup Anon accomplices. And then there’s Coup Anon lieutenant Josh Hawley, the erotophobic Senator from Missouri who recently boasted, “I’m not gonna cower, I’m not gonna run,” as footage went viral of Chickenhawk Hawley running away from the Capitol-crashing Coup Anon’ers—just after he’d fist-pumped them into a fighting frenzy. As Capitol Cop Michael Fanone put it, “Josh Hawley ran like a little bitch.” Though that’s an unintended insult to girl-dogs, sissies and women who take no shit, it’s an apt description of the cowardly fist-pumper from Missouri. But will anyone important—especially the Big Orange Cheesebrain—be held accountable for this criminal Coup Anon?

We also talk about Public Access TV—which had more Free Speech than YouTube—and which I’ll soon be discussing on HBO (!), the Climate Criminal KarTRASHians (especially jet fuel-spewing Kylie Jenner and Travis Scott), yummy Armie Hammer and cannibalism kink, the unconscionable extradition of journalist Julian Assange and how we really need to quit this Coup Anon Kink Crusade and just “Be Bonobo” on The Bonobo Way of peace through pleasure, ecosexuality, female empowerment, male well-being, great consensual sex and sharing everything.

Read more prose and watch the shows uncensored and free on DrSuzy-Tv: https://drsusanblock.com/fdr-coup-anon-kink

Need to talk PRIVATELY? Call the Therapists Without Borders of the Dr. Susan Block Institute anytime: 213.291.9497. We’re here for you.