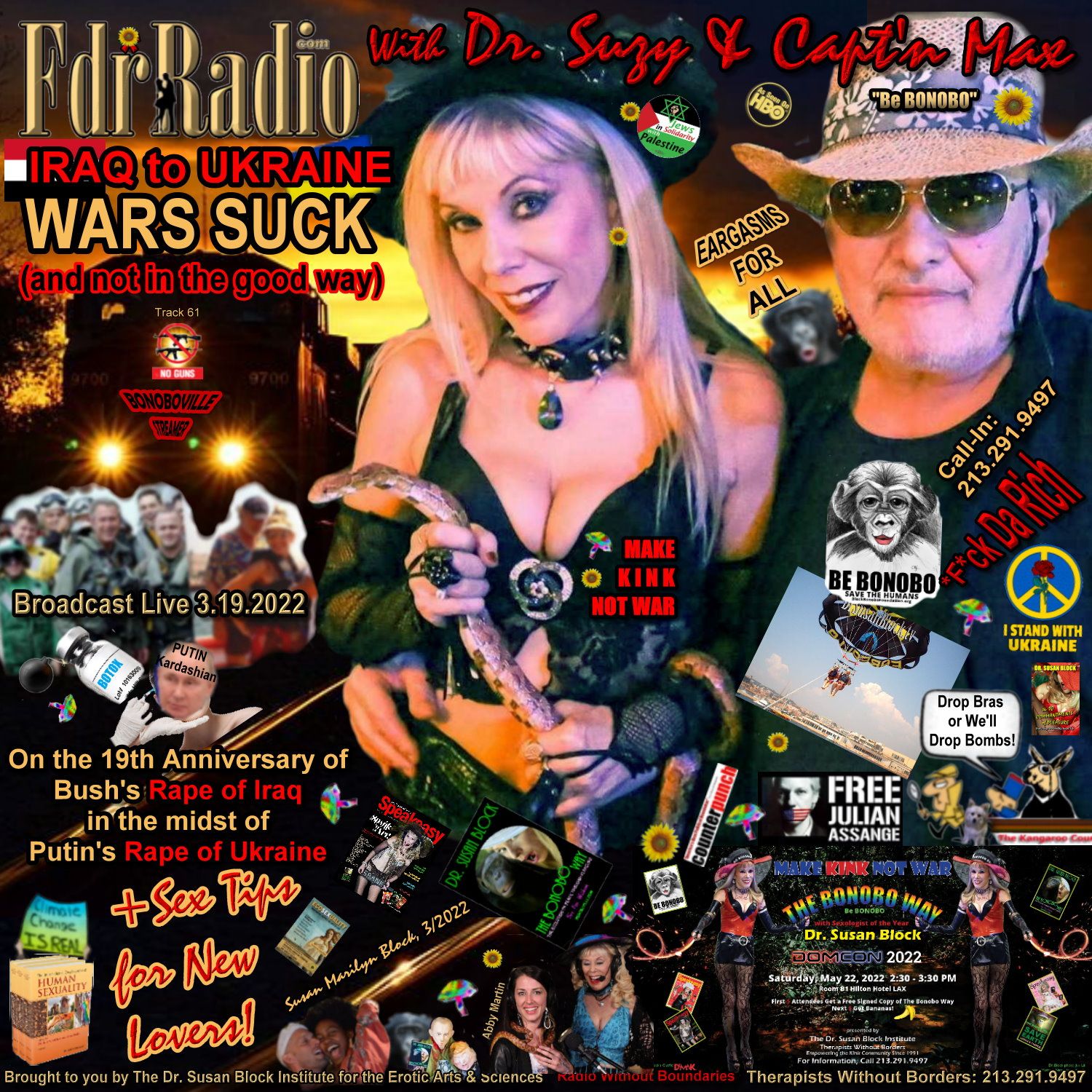 At least, we have good sex to keep us warm and somewhat happy to be alive!

Well, some of us do. Capt’n Max and I are so blessed, but on this live 3/19/22 broadcast, we remember March 19, 2003 as the start of Bush’s “preemptive” invasion. I called it the Rape of Iraq, and in retrospect, it seems like a blueprint for Putin’s current Rape of Ukraine. Besides monstrous death and destruction, the “collateral damage” of these rapacious, loser wars includes the Rape of Free Speech by Big Tech against so-called “disinformation,” which winds up destroying the work of a lot of great leftists, like our friend Abby Martin.

More topics:
• Almost 20 years ago, as Dubya dropped “smart bombs” on Baghdad, we brought Art Bombs to Cannes: American Libertines for Peace. A month later, as Bush put on that silly flight suit to preemptively declare “Mission Accomplished,” we accomplished more by parasailing in Cannes.
• Question: Did Putin see Bush’s Rape of Iraq as a playbook for his Rape of Ukraine?
• Ammosexual “war porn” of guns, missiles, jets and aircraft carriers is everywhere while regular porn is demonized and women’s sexuality comes under “Handmaid’s Tale”-style attacks. Yikes!
• In a rare conflict, Max calls American Republicans “Soviet,” while I say they’re not like the Soviets (who tried—and failed—to practice communism), but more like the Russian Tsars that Putin admires. Well, we practice Bonobo Conflict Resolution: kiss and make-up (it works)!
• The only thing Putin hates more than Communism is wrinkles. Thanks Botox maker AbbVie for making Putin crack! I’m against some sanctions that hurt the Russian poor, but a Botox Sanction is perfect!
• So much for skin-smoothies… onto Sex Tips! Jake (22) calls in from Indiana for help with “first time” sexual intercourse. There’s a first time for everything, but there’s only one first time for anything; you never get to have a second first time, so hopefully, our ideas for good sex and romance will make it a beautiful experience for Jake and his GF.
• Sarah Ann, who asked me to help her quick-on-the-trigger BF on last week’s “Be BONOBO” show, writes back with a success story, “Hey Dr. Susie [sic], I wuz the one with the one minute man who dont last. we did what you said and made him push dat rope and it worked!!! Now we have good nubbin! THANX YOU SO MUCH” [sic]
• “Richsplaining”—when someone who was born rich tells you how to get out of poverty.
This is the Mother of Disinformation.
• Arcadia continues to harass Bonoboville, which isn’t as bad as being bombed by Putin, so we are not complaining! Well, actually we are. And in the midst of our complaints, our electricity goes out! So, we wonder—in the dark—where are we? Caught in the new WWIII? Censored again? Is the Arcadia Politburo after us? Are the Russians coming?
• We talk pearls, symbol of our impending 30th wedding anniversary, gem of Aphrodite, representing the clitoris, the pearl in the luscious oyster of female genitalia, not to mention that pre-come “pearl” that emerges from some guys.
• Happy Spring Equinox! Vice is coming to Bonoboville right after our anniversary, then we’re off to DomCon 2022 where I will deliver “Make Kink Not War: Be Bonobo,” then it’s “Good Morning New Haven!” for my Yale reunion, and then back for another birthday, enjoy the show!

Need to Talk PRIVATELY? Call the Therapists Without Borders of the Dr. Susan Block Institute anytime: 213.291.9497. We’re here for YOU