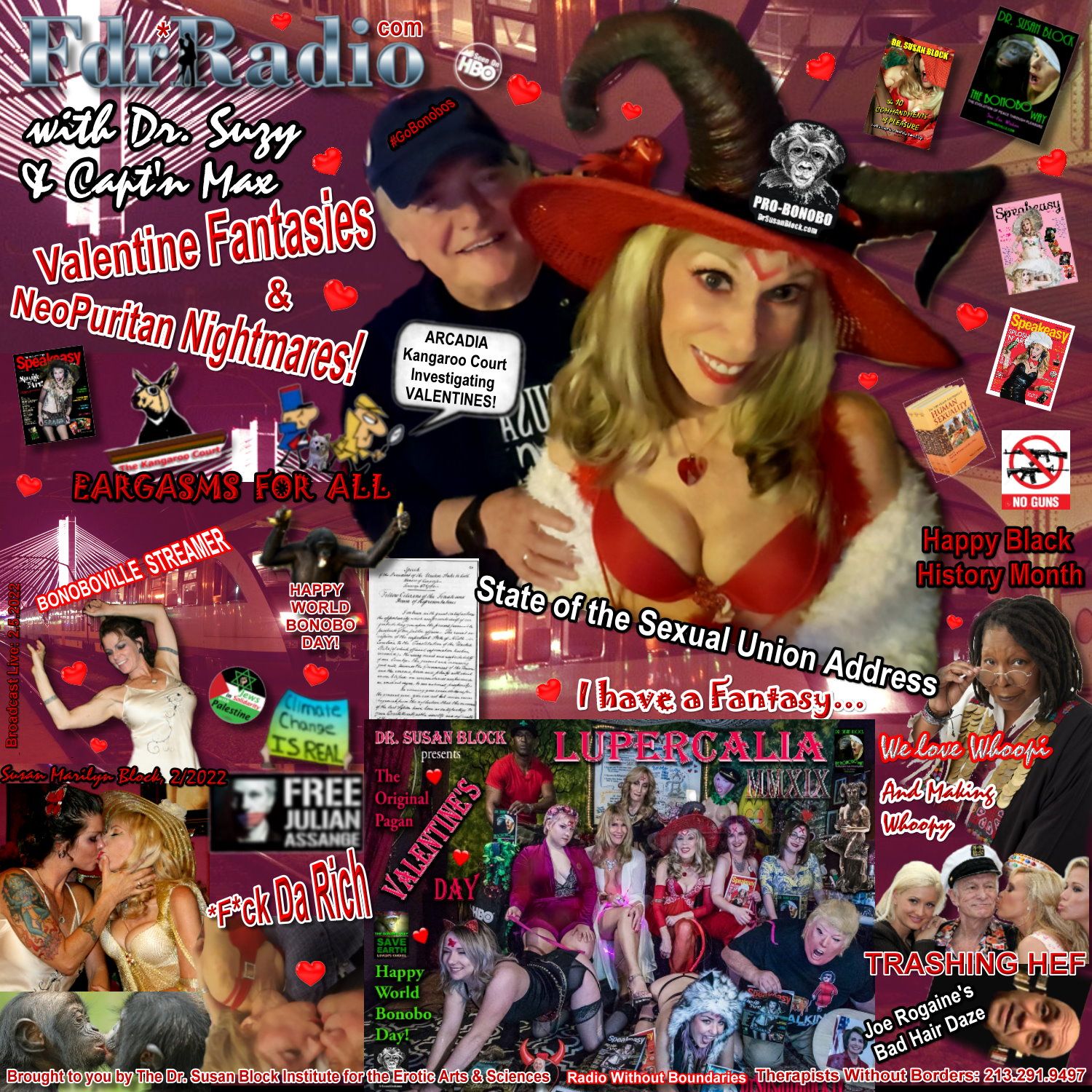 Censored by Youtube and harassed by Arcadia, our Love Train winds through a hailstorm of Neopuritanical suppression, fear, loathing, bugs and bullets… But there’s always something to enjoy on F.D.R! We’re still celebrating Lunar Nude Rear (Mooning the Moon), and it’s Black History Month, plus Valentine Season featuring V-Day, Lupercalia (the original pagan Valentine’s Day) and World Bonobo Day honoring the Make-Love-Not-War Apes who show us The Way to Peace through Pleasure. #GoBonobos for The High Holidays of Love! More Highlights of our sapiosexual ride…

–It’s infuriating, especially in Black History Month, to see ABC professionally spank Whoopi Goldberg (whom I met through the late great Scott Kelman) for saying that the “Holocaust was not about race.” She’s actually right; there’s no such scientific thing as different human “races,” and even if there were, Judaism’s a religion, not a “race.” She’s also wrong; Hitler was all about the Aryan “race.” So, it’s complicated. It’s also intriguing enough for Donald (no, not that Donald) to call in and say The Bonobo Way could have stopped the Holocaust. That’s pretty grandiose, but in a way, true!

–The Holy Trinity of the High Holidays of Love—Valentine’s Day, Lupercalia and World Bonobo Day—are underway, and this week’s throwback is the fantastic, orgiastic Lupercalia 2019.

–Gearing up for WCAP, I deliver my State of the Sexual Union address, inspired by Dr. Martin Luther King’s great “I have a Dream” speech, except in my case, I have a Fantasy…

–Many people we know are being censored for dumb reasons, so we don’t take it personally that Youtube censored the SUZY awards. I feel we’ve been sucker-punched, but this is the way the METAverse rolls, controlled by a few nervous billionaires and a few billion dumb bots.

–Hugh Hefner, aka Hef, aka Mr. Playboy, is demonized as a bloodless Charlie Manson in a new documentary series because there’s money in generating erotophobia. Some ex-Pets are defending poor dead Hef.

–We continue to discuss our hopes and fears for Julian Assange, the world’s most famous victim of censorship right now. FREE ASSANGE!

Get set to celebrate sex, love, lust and life in the midst of all the death, greed, hate and madness. Or forget “getting set,” and just start celebrating now!

Need to talk PRIVATELY about something you can’t talk about with anyone else? Call the Therapists Without Borders of the Dr Susan Block Institute anytime: 213.291.9497. We’re here for YOU all through 2022…