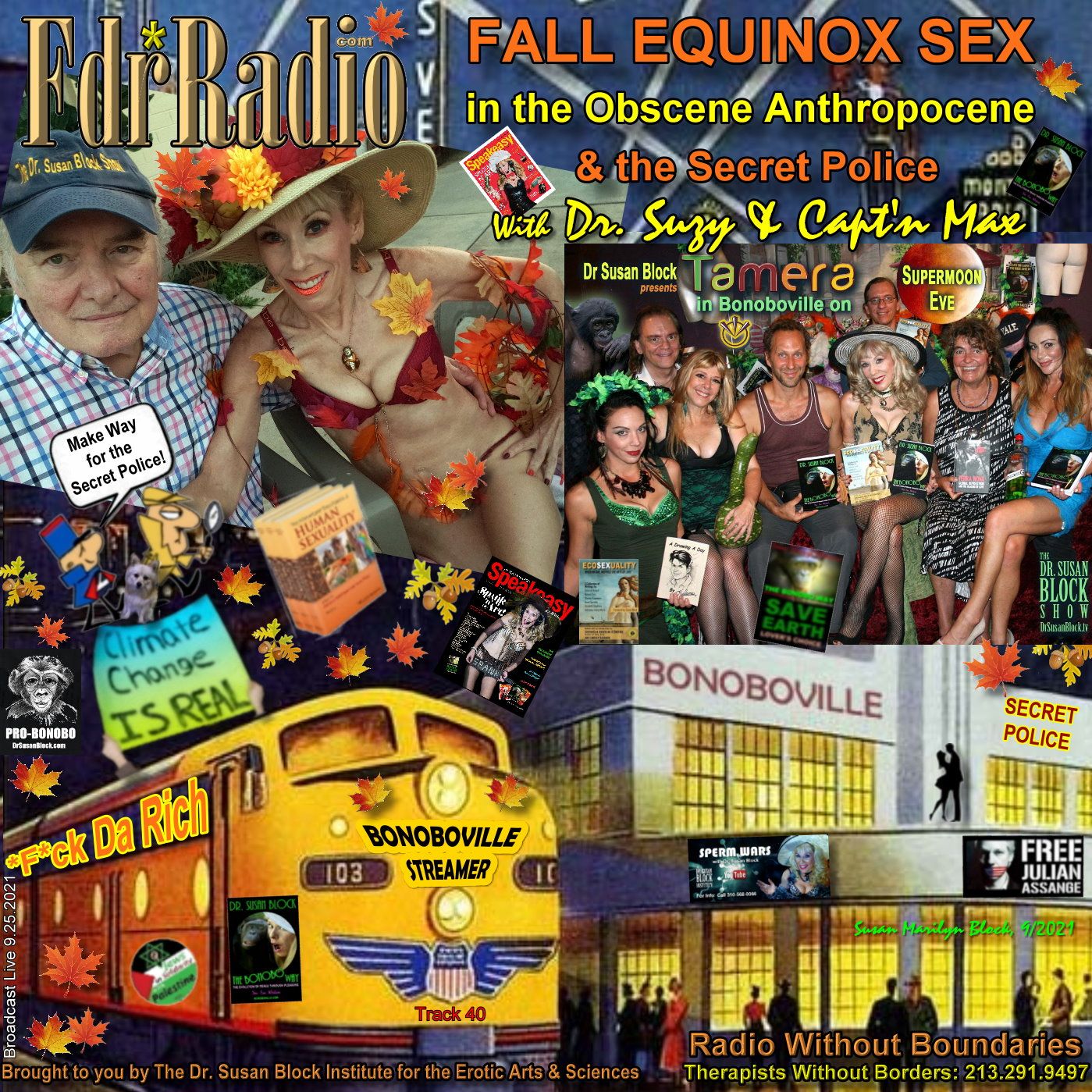 Falling in love in Fall flows like sweet sap from the maple tree, the sun rising later and nights lasting longer, optimal conditions for cuddling up with someone you love and falling deeper into the warmth between you. Of course, long-term love has its ups and downs, hair-raising twists and hairpin turns, and so does our Love Train as we ride through some of the glories (gorillas going downtown!) and hazards (climate catastrophes everywhere!) of Autumn Equinox, 2021.

At a couple points, this ride gets so intense, our little Love Train almost goes off the rails (like that poor Amtrak Train in Montana, RIP), but we get back on track, choo-choo’ing through the floods, fires and relationship issues of the obscene Anthropocene, the era we’re now living through when “human activity has been the dominant influence on climate and the environment.” The world’s worst polluter is the U.S. Military-Industrial Complex (MIC). The devastating effects are already upon us, waves of refugees streaming into U.S. borders from Haiti, Guatemala and other places displaced by climate catastrophe, violence, corruption and war, much of it stirred up by the U.S. MIC, as well as its “secret police,” the CIA.

It seems like secret police of one kind or another are everywhere—from the LA County Sheriff’s office (Sheriff Alex Villaneuva’s personal spy force) to Bonoboville’s backyard where we’re currently being harassed by city inspectors and police (secret & not). If they’re not secret, they’re often rather stupid police, like the Keystone Cops that let Brian “Dirty” Laundrie get away after he came home with Gabby Petito’s van and no Gabby. We also talk about the MSM’s (and our own) “Gabby Petito Syndrome,” as well as the sad loss of the world’s only official Vagina Museum; Bronx Zoo Gorillas going downtown; Cuomosexual problems and the ridiculous but ominous Trump Virus rally.

We contrast the MAGAt cult with a very different kind of human community, a “healing biotope” on a communal, organic, sustainable and very bonoboësque farm in Portugal, living the dream of peace and “free love,” featured on this week’s throwback, “Tamera in Bonoboville on Supermoon Eve,” with Terra Nova “global peace ambassador” & Tamera founder Sabine Lichtenfels and Tamera “Next Generation” leader Benjamin von Mendelssohn. Many thanks to UPRM Professor SerenaGaia Anderlini D’Onofrio who arranged Tamera’s visit exactly six years ago. What a fantastic show!

Need to talk PRIVATELY about something you can’t talk about anywhere else? You can talk with us… Call the Therapists Without Borders of the Dr. Susan Block Institute anytime: 213.291.9497.