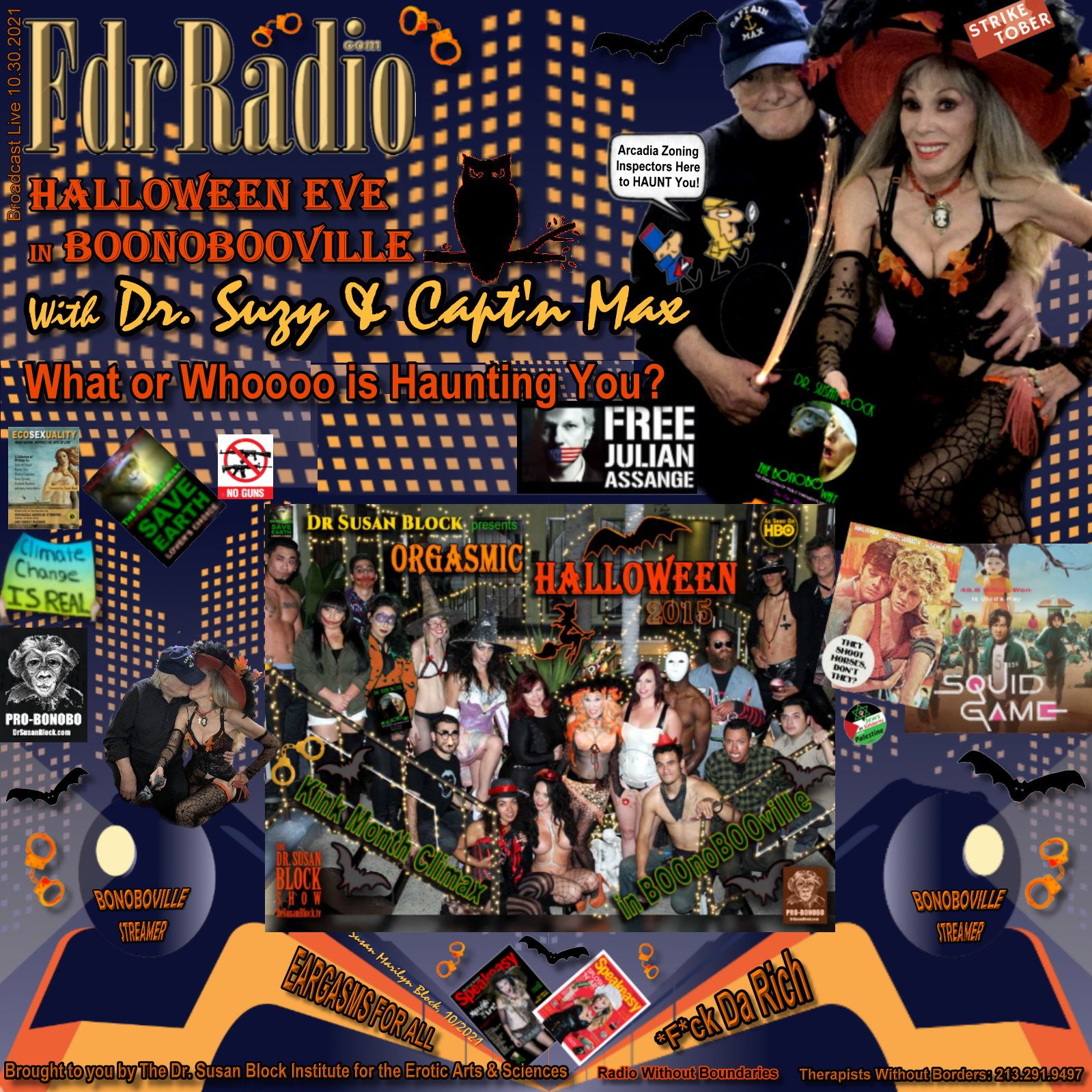 Flying into BOOnoBOOville on my Magic Dildonic Vibrating Broom (self-censoring the dildonic part with a Day of the Dead cooking mitt, lest the Ghost Bots of Big Tech Censorship shut us down!) for our Halloween Eve Kink Month Climax, I release the Samhain spirits for Uncle Satan’s Birthday and wonder: What or Whooooo is Haunting You?

Currently, the Ghost Bots are haunting us. We’ve won big censorship battles against Adelphia Cable TV (see the Fall of the House of Rigas) and more, but it’s tricky when your attackers are ghosts. Max recalls being haunted—and hunted—by police who didn’t *just* censor his words; they locked him up. This brings us to Wikileaks’ Julian Assange, haunted, hunted, locked up and tortured by hired ghouls for publishing important and disturbing truths about American empire. And we’re haunted by the Anthropocene, ammosexual culture, the Arcadia Zoning Politburo, Squid Games (“They Shoot Horses Don’t They” for the Digital Age), and the obscene enriching of the Already Rich (that’s why we’re F.D.R: F*ck Da Rich!). Though it’s not all bad… We’re also haunted by hot erotic memories, like first sexual experiences—good, bad or “the one that got away.”  Many cuckold fetishists are haunted by their cheating ex. “Steve” calls in from London, haunted by taboo desires, so we explore the haunted house of his libido, as well as the spooky haunts of Death itself… The ancient Celtic witches conjured All Hallows Eve as a sacred mix of Eros and Thanatos when we can pass through the barriers between the living and the dead. As we cross over the Halloween Eve Witching Hour, I take you on a short spin through the sexy spirit world with a reprise of my Scary Sex Ode to Halloween. As joyrides go, it’s a lot cheaper and less toxic than the Billionaire Space Dick trip—more fun too!

Even more fun: Immerse yourself in the wild Witch’s Brew of this week’s spooktacular throwback, “Halloween 2015’s Kink Month Climax in BOOnoBOOville,” featuring an autumn sky of stars, some of whom CLIMAX on the Sybian—another great vehicle to take you over the moon without leaving the room.

Read more prose and watch the shows (that are too kinky for Youtube): https://drsusanblock.com/fdr-halloween-eve