Kenneth W. Starr: A Pornographer for Our Times @DrSuzy 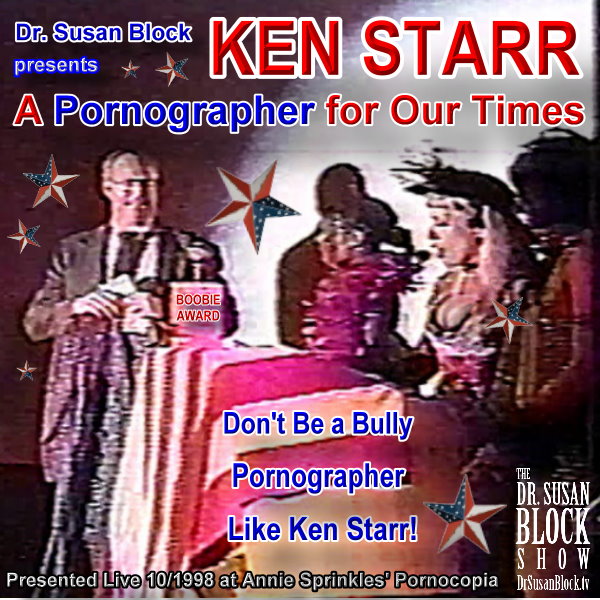 I also take you into my broadcast bed for an intimate after-party at the Villa Piacere where Capt’n Max and I explore the juicy details of the #StarrReport with such luminaries as Dr. Betty Dodson, Richard Pacheco, Kat Sunlove, Jack Hafferkamp, LaSara, KISS and Tod Hunter. Also at the Pornucopia: Dr. Vern Bullough, Dr. Carol Queen, Al Goldstein, Roy Karch and Veronica Vera.

This special episode captures a truly historic moment, including footage from the day a coerced and terrorized Monica Lewinsky testified before a Grand Jury, and reactions to the Starr Report and Boobie Award, including live interviews with KTLA5 and KNBC4. At a time when most Americans were becoming more open, tolerant and sex-positive, Ken Starr and his team of reactionary young ninjas (including a fledgling Brett Kavanaugh and Ann Coulter) didn’t succeed in their intended coup d’état (or as Joe Conason called it, “Coup de Twat”), but they did turn the clock back on sexual freedom, and now we have QAnon and a powerful majority on the Supreme Court (including Kavanaugh!) literally forcing their extreme #NeoPuritanical ways on the rest of us.

This video first aired uncensored in 1998 on public access TV stations around America.
Of course, this version is censored for Youtube (we don’t want our account shut down). So…