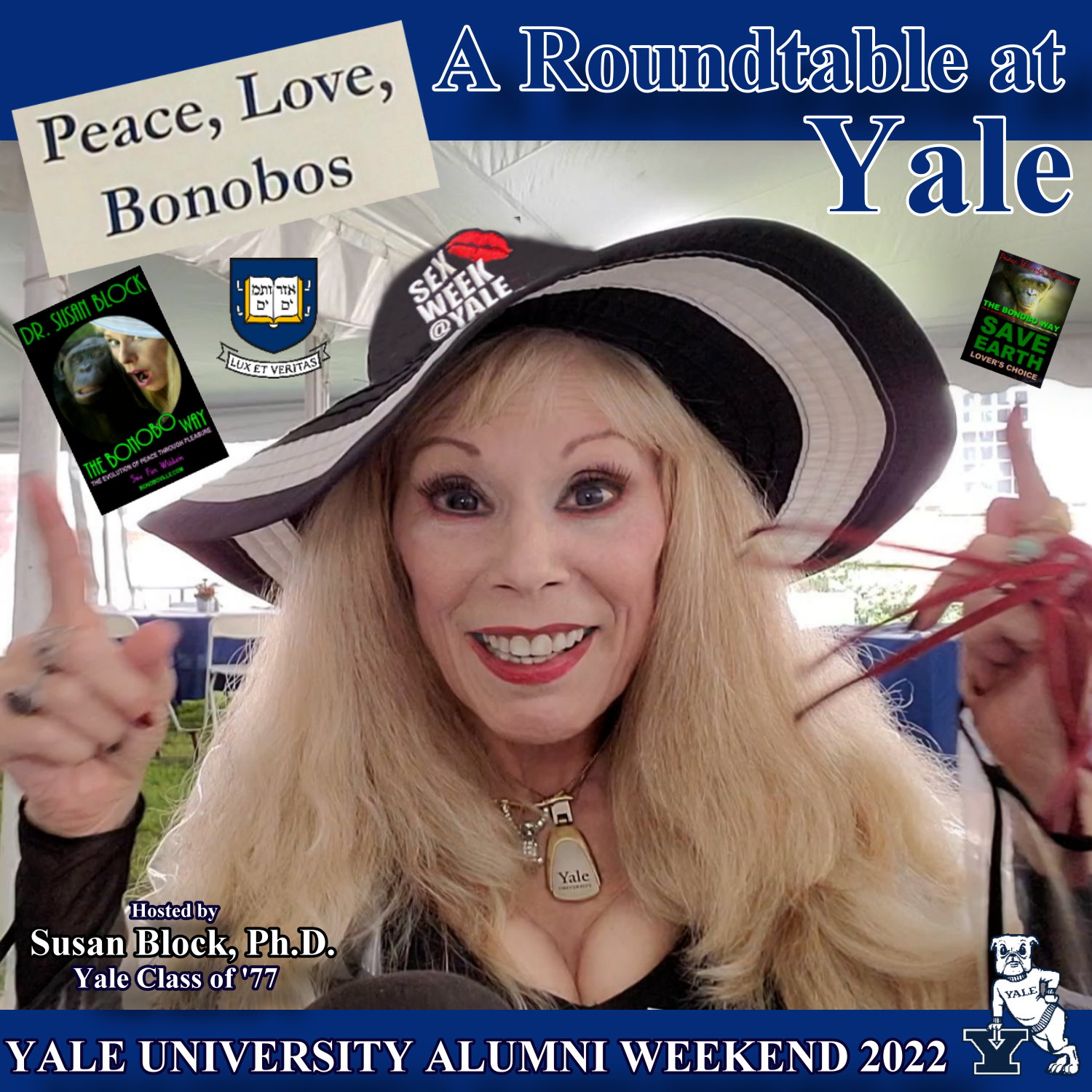 Warning: Explicit Conversations About Politics, Culture, & Sexuality
Join me at Yale for my 45th class reunion as I frolic among the Ivy Towers with Capt’n Max and the Eli Elite, Handsome Dan XIV, Supreme Court Justice Brett Kavanaugh’s classmates (Class of 1987) rallying against him and Sam Alito (Yale Law, 1975) at the Women’s Table, and my fabulous fellow #Yale Alumni at the Yale Repertory Theater, Yale Law School, Cross Campus, Toad’s Place and more. I also host a Yale Roundtable discussion on “Peace, Love & Bonobos” which is the centerpiece of this video.
Discussion Topics:
• Why we prefer King Arthur’s ROUNDtable to Putin’s long table;
• Why Yale’s “Killer Ape” Anthropology department made we want to major in Theater;
• How Max and I fell in love over our mutual opposition to the popular and horrible first Gulf War, commanded by President George H.W. Bush (Yale, 1948);
• How our love and antiwar fervor grew during the even more horrible wars in Iraq and Afghanistan commanded by George W. Bush (Yale, 1968);
• How George W. Bush’s epic Freudian slip confusing Putin’s invasion of Ukraine with his own invasion of Iraq brought the perma-war full circle;
• Why I become a sexologist;
• How I first learned about #bonobos the Make Love Not War great apes, on PBS, and then met some at the San Diego Zoo;
• What are some of the differences between apes and monkeys;
• How human apes are very close genetically to bonobos, common chimps, gorillas and orangutans;
• How bonobos make peace through pleasure;
• How bonobos make love in a Bonobo Sutra of positions, including face-to-face;
• How bonobo female empowerment is supported by male well-being and vice versa;
• Why bonobos (and humans) really enjoy sharing—even with strangers;
• Was Prince Chim, who lived at Yale in the Dr. Robert Yerkes primate center, the first bonobo in the United States?
• What’s SEX got to do with bonobo conflict resolution?
• Why other apes kill each other, and humans kill each other most;
• “Grooming” in primatology vs. the culture wars;
• Why bonobo female orgasm is most common during Hoka Hoka, aka genito-genital rubbing;
• Intercourse vs. Outercourse among bonobos and humans;
• Our competitive “inner chimp” vs. our cooperative “inner bonobo”;
• Nature vs. Nurture and how a bunch of baboons went bonobos;
• Primatologists Dr. Frans de Waal, Dr. Richard Wrangham, Dr. Brian Hare and Vanessa Woods on bonobos and Dr. Robert Sapolsky on baboons;
• Food-sharing and “sex work” among bonobos;
• Tool use and communication among bonobos and common chimps;
• The benefits and drawbacks of Zoos;
• The Lysistrata method vs. the Bonobo Way;
• Yale’s Puritan origins;
• Sex toys, sex education and the Religious Right;
• The true story of the rise & fall of Sex Week at Yale (SWAY), created by Yale students and destroyed by false accusations from well-financed Christofascist forces, including Focus on the Family, and an ex-Yale President’s desire for a scapegoat for the unrelated-to-SWAY bad behavior of powerful Yale fraternities;
• Why anti-abortion laws amount to forced breeding;
• Why I’m against all wars of my lifetime, from America’s War in Vietnam, that I protested pre-Yale, to our current war in Ukraine. Yes, Putin started it, just as Bush invaded Iraq, but we (and NATO) continue it, and now is time for peace negotiations;
• Why bonobos should be part of Peace Studies courses at Yale and other universities;
• How our ammosexual society channels our natural sex drive into violence to the benefit of the weapons industry, the military, the prison system and the police;
• “Make Kink Not War: Be Bonobo” and the Bonobo Way makes its way from our Bonoboville Reunion with Vice to DomCon 2022 to Yale;
• How to avoid catching COVID at all these reunions;
• How New Haven humidity messes with my hair;
• Why bonobos are highly endangered and how we can help save them from extinction (so they can help us save ourselves!): Donate to Lola ya Bonobo, Friends of Bonobos, the Bonobo Conservation Initiative.
• #GoBonobos for Bulldogs… Boola Boola!
• Music: Yale Harkness Tower Bells; The Whiffenpoofs (Yale, 1977); Dr. Oscar Hills (Yale, 1977) on Banjo; Bales-Gitlin Band (Ginny Bales and Jay Gitlin) – “Disco Inferno” & “Johnny B. Goode”
Read more prose & see the photos: https://drsusanblock.com/yale-2022